A TWR radio programme calling for reconciliation is part of a broader effort in which Ukrainian Christians are reaching out to areas where fellow believers suffer amid separatist fighting.

AM and FM broadcasts of the new programme by the Ukrainian national partner of TWR (also known as Trans World Radio) have been underway for more than two months, and the initial response has been encouraging. With government troops battling in the eastern part of the country against separatists backed by neighbouring Russia, as many as 90 percent of the evangelical Christians in that area have left their homes and moved west to get away from the violence, according to TWR Ukraine’s director.

The ministry’s programming continues to go out to the unsettled eastern areas and to Crimea, which Russia claims to have annexed. TWR Ukraine still receives letters and even donations from those areas now estranged from the rest of the nation.

“As a result of these tragic events, people hate each other with all their heart and desire revenge,” said Director Oleksandr Chmut, who is also one of the hosts of Reconciliation for Ukraine – Your Chance for Revival. “But they won’t have normal lives without forgiveness. We teach them how to forgive in a biblical way. To do this, they need to repent and accept Jesus. We help them to understand how to behave when they are offended by someone or become victims of violence.”

Chmut’s observation is reflected in a letter from a programme listener who indicated that he struggles with his deep resentment toward Russia and its president.

“Sometimes it is very hard to love our enemies,” the letter writer said. “… I understand that to curse someone is a sin, but I cannot help doing it. I ask God for revenge on this person. … How can a human learn to listen and understand God?”

Another listener offered her thanks for the new broadcast and added, “Now it is so important to hear such topics. I’m going to visit my relatives in Russia. I ask you to send me recordings of these broadcasts.”

Chmut and staff member Olesya Vasylenko, an editor and translator based in Kyiv, painted a bleak picture of general living conditions in the eastern areas amid the fighting. Evangelicals are facing serious danger: Churches have been burned; some members have been tortured and even killed; others have been falsely accused of being American spies.

The positive news, on the other hand, is the amazing response of churches in central and western Ukraine during the crisis, Chmut said. After the Ukraine army took back areas in the east, such as the city of Sloviansk, volunteers travelled there to help rebuild churches, houses and mission buildings.

“The Church’s support is huge,” Chmut said. “Christian communities collected finances and humanitarian aid to help people from the East. Many churches cancelled their summer camps and other activities in order to provide shelters for refugees. Believers also invited them to stay in their homes.”

Vasylenko voiced a cry from the heart to believers in the West who are concerned about Ukraine.

Go to www.twr.org/ukraine to read more about the new radio programme and how to support its continued broadcast across the struggling nation. 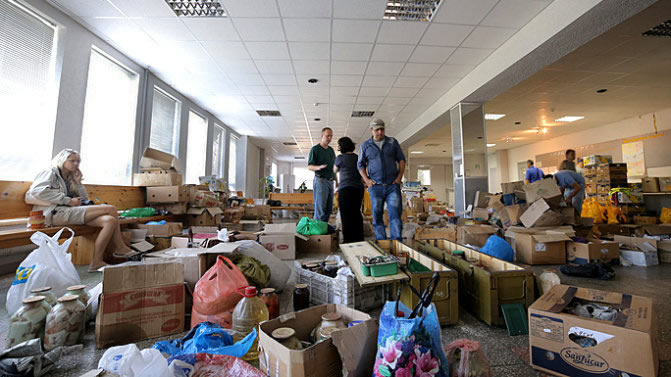