It’s been a stormy couple of weeks for TWR: the global headquarters in Cary, North Carolina, found themselves in the path of Hurricane Florence, causing a power outage but thankfully little other inconvenience or damage.

Hurricane Florence arrived just a few days after the transmitter site on Guam found itself in the path of Typhoon Mangkhut, which swept across the Pacific. On 8th September TWR staff braced themselves, and supporters around the world prayed as the storm barrelled towards the tiny island.

“Praise God!” wrote KTWR Station Manager Grant Hodgins on 11th September. “We were very blessed that there was no sustained damage to the towers, transmitters or station. The power of prayer is evident. We asked God to protect the station, and he did!”

The storm left more than 80 percent of Guam without power, but KTWR’s aging generator, operating at half power, kept the station on the air until eventually the it failed, leading to a temporary loss of airtime until island power was restored.

Typhoon Mangkhut left no doubt in TWR’s mind: shortwave Bible broadcasts across much of Asia go silent if KTWR on Guam doesn’t have a strong generator to rely on when the power grid is hit by tropical storms. Listeners in countries across Asia including China and North Korea rely on the broadcasts for their spiritual sustenance, so a new generator has become a high priority.

TWR are raising funds over the course of 3 years to replace the generator. In total, a new generator will cost around £290,000, and we are seeking to raise around £115,000 this year from our supporters around the world.

If you would like to donate towards the fund which will enable the sustainability and development of the crucial ministry to Asia, you can give securely at our online portal, mydonate.bt.com/charities/twr-uk

Photo: The Detroit 16-cylinder generator has been a workhorse but is ready for pasture. 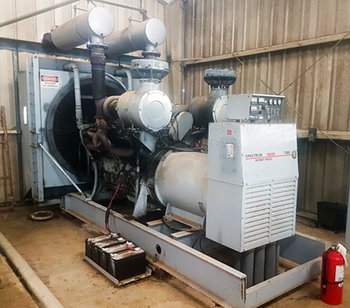