The Japanese are the second-largest unreached people group in the world. More than 70 percent claim no personal religion, but practice ancestral worship combined with rituals derived from Shintoism and Buddhism.

TWR began ministering to Japan in 1979 with shortwave radio broadcasts from Guam. After the 2011 tsunami, God opened the door for us to minister over community FM radio stations. Working with pastors in Japan to meet the needs of survivors, we gradually expanded our programme line-up as well as the number of partnering stations.

Today, TWR’s programmes can be heard from a total of 17 stations located across ten Prefectures, broadcasting a total of 218 hours of biblical programmes a month. Programmes are also accessible online at twr-jp.com and twr360.org.

Time and again, we hear from Japanese listeners about how the programmes have helped them. While some of them stumbled upon the broadcasts, TWR has also been making an active effort to publicise the programmes.

Working alongside Japanese churches in what we call “Donkey Tracting”, TWR Asia has been facilitating believers from Singapore churches to participate in several Donkey Tracting trips every year. Together, Singaporean and Japanese believers go into the community and share the good news, as inspired by our Lord, who came “humble and mounted on a donkey” in order to bring salvation for all.

In just one year, TWR supporters from Singapore walked 350Km (about 215 miles) and gave out 47,000 tracts and flyers. One of the volunteers shared some of her thoughts and experiences from the trip:

What were your thoughts and feelings regarding the trip?

The Lord clearly spoke to me about his great commission. There was so much I was thankful for after receiving Christ in my life and it is now my turn to spread the word to the people of Japan.

What did you learn about Japan while you were there?

One of the Japanese pastors we met shared that Japan is in need of help from other countries to bring the gospel to them because in the past many foreign mission organisations had sent missionaries here and were rejected, as Japan was a very hard ground. Many missionaries left in disappointment. I can imagine now how hard it must be to penetrate the ground with the Gospel.

What was a typical day like during your trip?

Every day we would go tracting from 8:30 a.m. to 4 p.m., walking more than 10 kilometers a day, praying while we walk. By God’s strength and grace, we were able to give the tracts to every house we had been assigned.

Please join us in praying for TWR Asia’s ongoing efforts to sow Gospel seed in this very hard ground, and praise God for the way Japan is opening up to the Gospel. 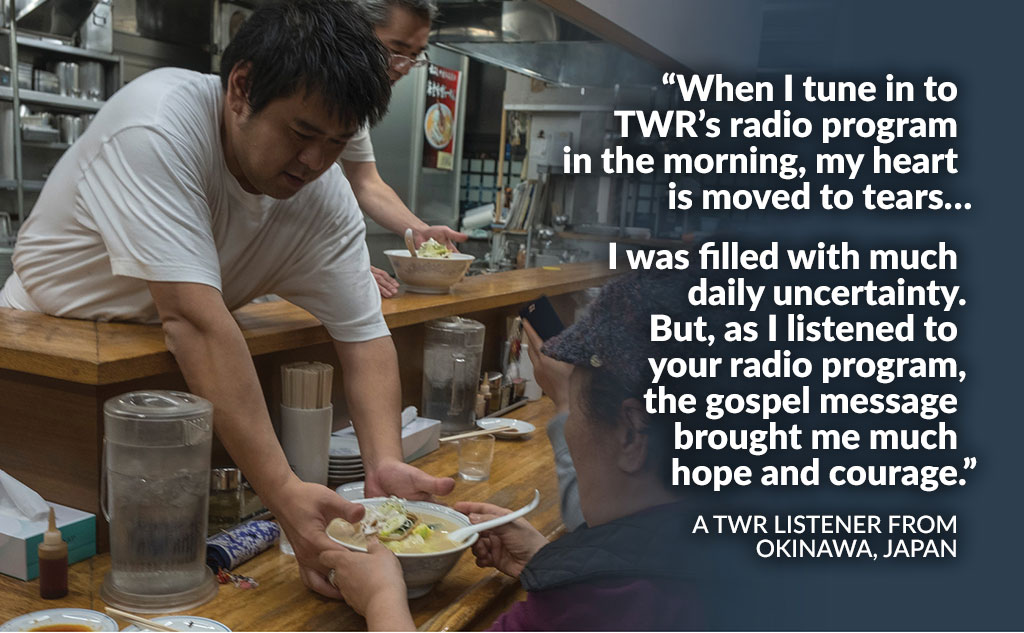