‘You cannot send containers of food to Cuba because of government rules, but we can send God’s Word’.

In May 2018 TWR’s transmitter on Bonaire started broadcasting the Spanish language version of The Word For You Today (TWFYT), La Palabra de Hoy Para Ti.

TWFYT distributes more than 8 million Bible-based devotionals, written by Bob and Debby Gass, in 20 languages around the world. In 2015, TWFYT started printing their devotionals for the first time in Cuba, rather than attempt to import them. The devotionals are distributed through local churches.

With the stronger signal from Bonaire, TWFYT can now broadcast their daily devotionals in audio form from Bonaire. The Spanish version was translated by a Latin American native, keeping international differences in mind, and is voiced by a well-known actress from Venezuela.

Phil James, Director of Global Development of TWFYT explained why he chooses to broadcast the devotional over the radio:

”Our goal is to reach as many people we can with our devotional. However, in Cuba, this is not simple. We have between 20-30 drop points in Cuban villages where pastors go on their bikes to pick up the books. The roads throughout Cuba are in poor condition and the old trucks we use to deliver the bundles of devotions to the various drop points often break down.

We tried to send the books by postal mail, but that is not very trustworthy since the books simply don’t arrive. The Internet is scarce and expensive in Cuba. Most people only have internet access in public places such as hotels and tourist attractions. With the radio signal from Bonaire, we expect to reach more people and connect with more churches.” 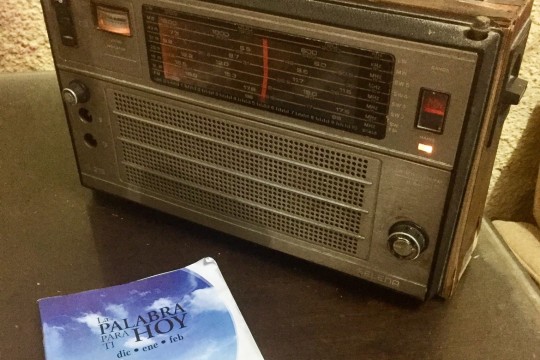 “Cuban people don’t have much hope when they look at life in a natural way. The economy in Cuba is not strong and the average person only earns $20 [about £15] a month. In April, Cuban president Raul Castro will step down from his presidency, but there is little change expected for Christians. With the radio programme, we can point people to God, so they can find help with their problems. They can learn how to look to God as their source for help.

Without God, life is crumbling in Cuba. Despite all the problems, ever since the 90’s, Churches are packed and there is a big explosion of new Christians. Many Christians in Cuba, however, don’t have access to a Bible. Pastors rarely have the benefit of receiving formal training or attending seminary. Today, pastors will write sermons based on what they have heard on the radio or have read in the devotionals. We have heard pastors saying, ‘we use your devotionals to write our sermons’.

TWR is not political and with the new strong signal, it cannot be blocked!”

Phil James of TWFYT added, “We choose TWR Bonaire because you are now reaching Cuba and nobody else is doing it. We have been talking with TWR staff over the years, and we have learned that both our ministry cultures are similar. Focusing on the Word, bringing it to the nations, teaching and discipling people. This is part of both our DNA. Jesus is coming back soon, and we must be about our Father’s business.”